A Global Commitment to Going Green

With ten LEED certified facilities and millions of more square feet in the works, an extremely large and well-known global Internet company committed to running “Green” facilities was facing cooling and maintenance challenges at several of its data centers. In many regions across North America, airborne debris such as cottonwood seed, insects, leaves and more gets drawn into their cross-flow cooling towers resulting in fouling of the cooling tower Fill, Sump and strainers, thus reducing overall operational efficiency and increasing their maintenance and energy cost. “Our company is totally committed to a green building initiative across all areas of our company and we recognize that deployment of best practices relative to air movement and cooling of our data centers is central to increasing our operational efficiency and minimizing energy utilization – we therefore are committed to finding and deploying the best technologies to help meet our company goals” said Andy T., Facilities Engineering.

“Unlike other companies that primarily use air cooled chillers to provide cooling to their data centers, we have chosen evaporative cooling systems (cooling towers) across our network because it provides more efficient and cost effective cooling vs. air cooled and chilled water systems; however, in order to capture all of the savings and benefits, we needed a method of stopping debris at its point of entry without restricting airflow, increasing fan motor torque or reducing heat rejection”.

Andy contacted Randy Simmons of Air Solution Company, a manufacturer of patented intake air filters (commonly referred to as “Cottonwood Filter Screens”) for use on cooling towers and other mechanical systems. The filter screens they recommended are specially engineered for use on high volume / high velocity air movement systems, with minimal impact on airflow and static pressure; they further consisted of a specialized non-stick mesh that is designed for easy cleaning without removal from the equipment and included quick release fasteners. Following internal discussions, Andy decided to try out the screens to see for himself if the expected results would be achieved within their operation.

Prior to installation of the filters, Andy’s team established a controlled test plan which called for conducting key performance measurements twice daily over a two week period on two identical cooling towers with identical loads throughout a broad spectrum of ambient dry bulb and wet bulb temperatures – wind loads were also calculated and factored into the results. To establish a base-line, testing was first conducted without the filters, then again using the filter screens – it should be noted that they were able to replicate the findings on both cooling towers giving validity to the findings.

Face velocity tests were conducted using an Anemometer, traversing 18 different locations across both the front and back intake openings – it was discovered that the air velocity was highest in the mid section of each opening but very low around the outer edges and corners near where the cross supports attach. Other daily data points included: date, time, dry & wet bulb, fan motor KW draw, air velocity, fan motor RPM’s, motor hp, motor torque, leaving water temperature and returning water temperature. 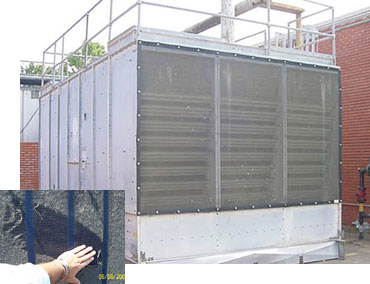 Upon installation of the Cottonwood Filter Screens, the initial results showed a 25% drop in air velocity in the mid-section of the Fill, however, it was also noted that the air velocity at the edges and in the corners had increased significantly, providing greater air movement across all regions of the Fill – this increased the cooling towers heat rejection capability. In short, the filter screens diffused the intake air and increased the laminar air flow which in turn optimized air exposure across the entire surface of the Fill – though air velocity was reduced in the central part of the fill, overall air volume was retained and better utilized. The big “light bulb” moment of this finding is that the increased laminar air flow increased the delta-T and delivered a 1 degree lower water temperature at the sump over the cooling tower manufacturers design; this result was seen over the entire spectrum of ambient conditions tested with no significant impact on any of the other key data points measured throughout the test period. We estimate that the efficiency gain resulting from the use of the filter screens reduces our fan motor energy cost by 5%; and with an international network of cooling towers can amount to huge energy savings”.

With respect to maintenance, “installation of the filters is proving to increase the efficiency of our water treatment chemicals by reducing the organic load which impinges upon present water treatment levels, while also reducing our maintenance time and effort by over 25%. When factoring in both the energy and maintenance related savings, it became clear that the filter screens had a payback well within the company’s acceptable payback period.

As a result of their findings, this large internet company recognized that the Cottonwood Filter Screens effectively supports their global green building initiatives and have installed filters on 50 cooling towers and is planning installation at other data centers with air intake and maintenance related challenges.

Use of Cottonwood Filter Screens has:

For more information or, to locate a representative nearest you Contact:

Air Solution Company 513-860-9784 or visit their website at www.airsolutioncompany.com